Listening to the song after all these years, in a different medium and in a radically different historical moment, its anti-fascist connotation (or just another layer in historical, symbolical palimpsest) came across, and awakened in me long-dormant memories of the stories I heard from my grandparents and their experience during the WWII. The images in the video are dubbed with the recording of the song distinctly marked by the hissing and crackling sounds, an important sonic addendum to the song. The song also awakened images from my childhood imaginings of times past, interspersed with grainy recollections of photos in black-and-white of the anti-fascist struggle, iconic people, events, places, stirring the feel of the (feeling of the loss of) bygone times. Clearly, the video of the song, this specific audio-visual document, presents an exquisite remnant of the past that over time managed to get drenched in the symbolic, evolved into a distillation of a very specific historical moment. And its future.

I listened, and I listened again, and I was moved.

[What was it that did the moving?]

The experience enticed me to ask:

What makes sound/music absorb and condense a historical moment/event?

Is it possible to feel and relate to the past “just” listening to a song from the past?

What, finally, does a song from its future say about its past?

The song, although primarily aural (sound and lyrics) can be understood in the context of the imaginal defined by Chiara Bottici as “simply that which is made of images and can therefore be the product both of an individual faculty and of the social context as well as of a complex interaction between the two [and it] emphasizes the centrality of images, rather than the faculty or the context that produces them; therefore, it does not make any assumptions about the individual or social character of such a faculty [and] comes before the distinction between real and fictitious” (Bottici 2016: 5). The song in this case is potently imaginal and thus works as a machine that triggers, (re)combines and (in)fuses memories of the narrations of my forbears’ youth spliced with a cornucopia of mediated images, sounds, movies that have overtime come to define the contours and the workings of the politics of the imaginal.

The song (or is it rather the listening experience?), made me think about the technical aspects of the “survival-recording” that enabled their future listeners to partake in a truly unique imaginal and historical-moment-capture.

After some further digging I found that the “Linden tree” YT recording was recorded by Rudi Omota, an inventor and sound engineer, amidst the intensifying Second World War, just months after the Province of Ljubljana was annexed by fascist Italy (3 May 1941). The performance took place in the Union Hall, one of Ljubljana’s prestigious venues and it marked the onset of a three-year-long “cultural silence” (sln. kulturni molk) in the occupied city: this did not entail total termination of cultural activities, but rather to redefine cultural production in terms of supporting national unity and resistance against Italian occupation, while boycotting anything that might be interpreted as cooperation with occupying authorities (Gabrič 1989).

The 1941 recording of the Academic choir Union Hall performance presents a break in the technically largely unmediated tradition of this song. It thus became an object of mediation that could transgress the boundaries of space and time, as well as a relatively limited, if immediate, transcend the relatively limited reach of live performances. This is not to imply that performances were not recorded before this event, but neither is it relevant: what makes this particular recording truly intriguing as an object of analysis is the way it was recorded (improvised, clandestinely). 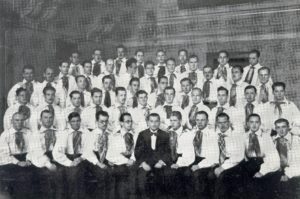 Academic choir in Ljubljana; in the middle of the front row the conductor, France Marolt, 1935. Photo: dLib.

As mentioned above, the song was recorded by Omota, who had risked his life to hide before the performance a microphone into a chandelier. He recalls:

Although the Italian occupation authorities gave permission for the event, we knew that it would be thoroughly guarded and under strict control. I was tasked by the choir and by the director of Union Cinema to record this concert, which it was clear to everyone to have been the last (Rudi Omota). 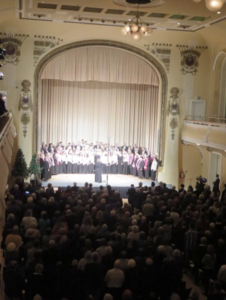 From the performance of Academic choir Tone Tomšič in 2016 to commemorate the 75th anniversary of the 1941 performance. Photo: Marijan Zlobec.

To record the performance, Omota split the 35 mm film in half to gain more tape, which was in short supply. He “recorded the concert on the sound track of a film tape using a tone camera he invented”. Omota:

The work that followed went on in complete secrecy, only some of the most reliable people knew about this. I don’t remember very well when I was installing the microphone, which had to be completely invisible to the eye. I lowered it from the ceiling to the chandelier. In the evening, during the concert, I sat in the room behind the screen, locked, of course, and recorded the performance (Rudi Omota). 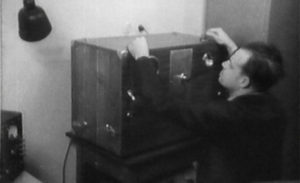 Taking a listen to the recording, it is crucial to emphasise two central elements that expose or construct or contribute to the song’s affectivity, and “compose” the song’s mnemotechnical aspect: technical and mnemonic.

In terms of technical aspects, what the recording reveals is that Omota effectively archived (i.e. “stole” or “saved”) the performance/song from a very specific historical moment onto a material, if improvised, sound carrier: the WWII, the Italian occupation, and emergent resistance. It was a singular occurrence in a very specific, emotionally invested, perilous and precarious historical moment. The very act of recording – as much as it made the uniqueness of the live performance reproducible (and dissolving the aura of the artwork) and available for possible future uses, and as much as it enabled the future listeners to partake in the experience – contributed to the redefinition of listening experience; for one, the peripheral, non-choir sounds that are part of any performance and rarely consciously registered, were recorded along with the song, yielding to the future a sonic insight into the ordinariness/exquisiteness of the event, as well as of the song.

The recording thus effectively “captured” not only the song but also a very specific soundscape (all the more powerful in the absence of photographic documentation): the tape also caught the sounds of the audience, adding to its documentary value. In capturing peripheral sounds, the recording surpassed in terms of historical preservation both notation and lyrics, as well as the specifics of live performances: it added a degree of liveness or authenticity akin to live performances, but also quite different from them in its reproducibility.

Omota’s action thus left a unique recording to a future 78 years later, a sonic document that is also a document of the time, of captured affective intensity of the singing and the sounds of the audience. His action thus enables us today to (retrospectively) partake in a recreation of a historical moment so intensely packed with historical intensity. Yet, it is not just that fateful December evening in 1941 that has been encoded into the cultural life of the song, but also its subsequent futures that added additional layers of meaning, spurred different uses.

The relatively low quality of the recording, probably intensified by aging carrier and the process of digitisation, is hardly a drawback. To the contrary, the mono-roughness and low granularity of recorded sound is part of the architecture of a certain “feel” of the past. This is further enhanced by a pronounced lower range, missing middle range and peaking highs, as well as peripheral sounds of the audience in the background (cough, moving chair). This all adds to the construction of the “sound of the past” and intensifies the arbitrariness of partaking in this “sonic re-event”. For example, what will forever remain an experientially inaccessible element of this historical event, but is recorded in the testimonies of the audience, is that the audience rose on their feet when the choir started singing the “Linden tree”, while the attending Italian officers stood up confused and left the venue.

In this sense, the song is an expression of the fusing of the technical and the mnemonic, and can thus be understood as a mnemotechnical device. As such, it enables the transmission of affective surplus, the importance of which seems to be enhanced precisely by collateral inclusion of peripheral sounds, which in recording’s singularity and exceptionality further enhances the immersivity not only into the song’s immanent soundscape, but critically into the wider historical moment. Importantly, this mnemotechnical device, on the one hand a technical testimony to an old and improvised recording technology (technical aspect), is on the other hand also an affective archive, which can be employed by listening, public performances or listening to recordings, as indicated in the opening paragraph (mnemonic aspect). In this sense, the song is a mnemotechnical testimony of the time distilling the exclusivity/singularity of the historical moment into a recorded sound, and constituting the song as a chance product of a clandestine and improvised action in a moment of historical contingency.

Listening to this recording and thinking about the event in retrospect, the song and its absorbed context, spliced with subsequent layers of history, carry a powerful statement of resistance, which is enhanced precisely through the very act of recording. This adds another role to the life of the song: the act of recording marked an important shift when singular uniqueness of a performance could be technically multiplied and integrated into a system of mediation. During the process it acquired a different life.

The question of how the technical quality of sound affects our imagination of the past, or how we remember through music, is not an easy one, and it surely is a highly subjective. It is not just the question of the “quality” of the sound, but also where that sound is perceived, by whom and in what context. These questions will be further investigated in the future, asking how does the song take on “the times”, the Zeitgeist? How does it – in reflecting both the technical conditions and the content of recording, and the surplus – draws into itself the past, history, time? In that, the song reinforces our anticipation of how the past sounded, and of what meanings we draw from the song and its palimpsest structure.