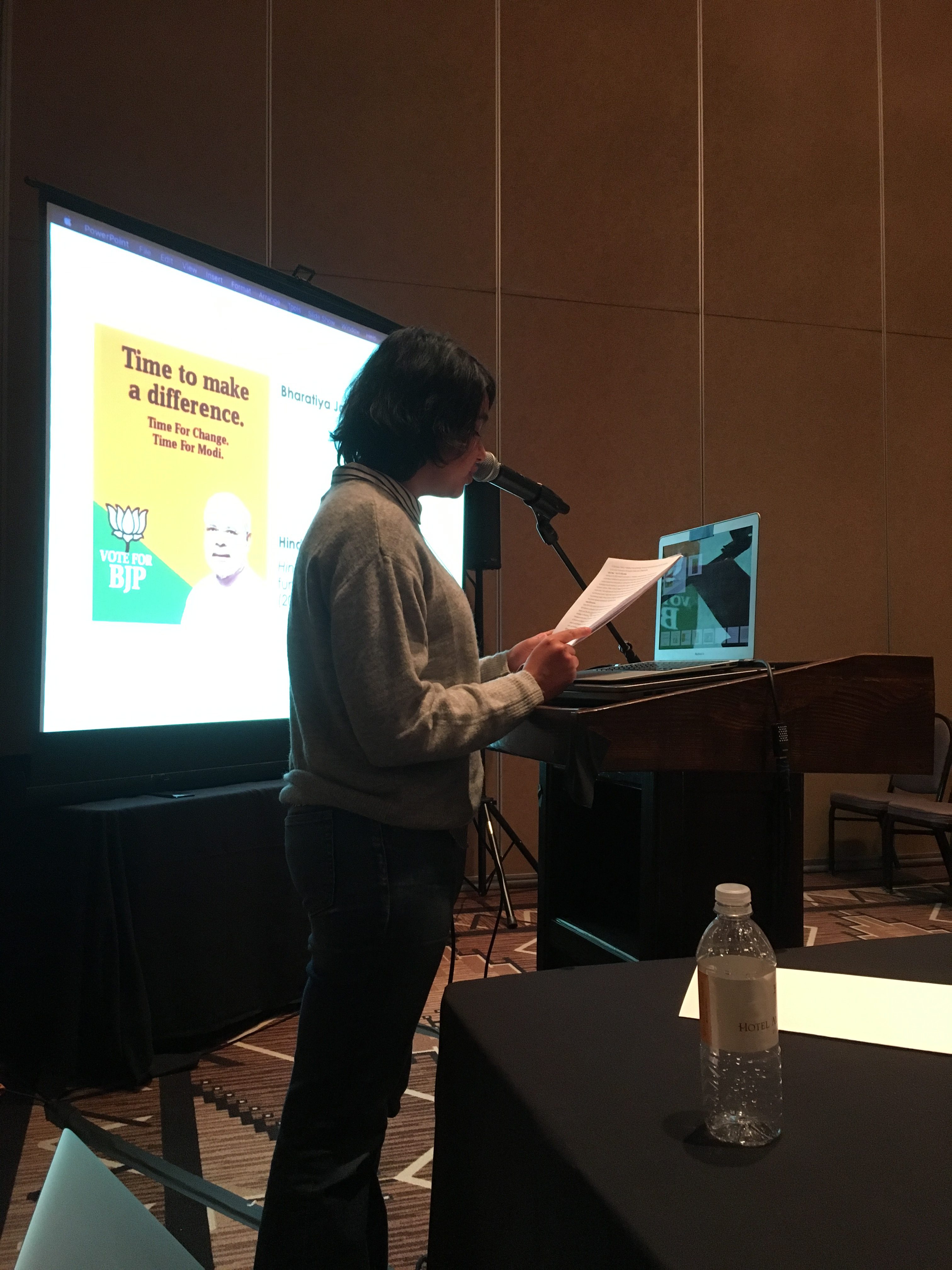 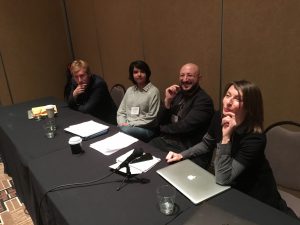 Panel and presentations, abstracts: This panel explores the political efficacy of music and sound in settings of political futility. Convening scholars working in diverse settings across the neoliberal global periphery (post-socialist former Yugoslavia, contemporary religious-nationalist India, and violent “post-conflict” Colombia), this panel focuses on how music and sound intervene, or are complicit, in a political atmosphere structured affectively by apathy, exhaustion, and capitulation.

The sounded practices we examine promise to reorder regimes of sound and silence in social space; cultivate ethical, intersubjective practices of care and solidarity; and model modes of thought and action beyond established conditions of living. Thus, we are less concerned with how pre-existing politics are expressed sonically, or with sounded tactics’ interventions into the political sphere, than with how sound, by working in the ostensibly apolitical registers of affect, play, and the senses, recasts politics as making life livable. Yet even as these affective sounded practices integrate the formerly inaccessible realm of the political into daily life, they also divert agency away from the struggle for future-oriented structural change that structures formal politics into more politically ambiguous realms. By examining post-Yugoslav self-organized singing collectives, the “rebellious musical gatherings” of oppressed castes in India, and the changing meaning of loudness in a troubled Colombian city, we attend to the ways in which the affective, sensible, and ethical dispositions of sounding and listening offer possibilities for life and world-making beyond the binary framework of the political and the apolitical.

Music, the politics of leisure, and alternative forms of life after Yugoslavia

In the former Yugoslavia, the post-socialist privatization of socially owned companies has introduced radical changes in working patterns, conditions, and rights. Consequently, this has contributed to structural feelings of vulnerability, uncertainty and instability related to the radical reconstitution of work-leisure relationship. In this paper, I engage with musical transformation in the field of leisure in order to detect potential modes of resistance to vulnerable modes of existence after Yugoslavia. I focus on “self-organized choirs” (samoorganizovani horovi) across the former Yugoslavia. These choirs, through collective singing, call for a politicization of the field of leisure and offer a critical response to the lack of “institutional care” for leisure in the commodified cultural production of the post-socialist neoliberal state. Self-characterized as participatory and decentralized collectives, these choirs prove the important relation between collective singing, self-organization and social engagement. By analysing their internal structures, performance strategies, and repertoire politics, I question whether, when and how communal music activities have the potential to shape livable life (Butler 2005) beyond neoliberal work-life restructuration. I ask the following questions: How do communal leisure activities like collective singing mobilize people in the former Yugoslavia to co-opt, endure, and resist precariousness and feelings of uncertainty? How do amateur choirs generate new affective mobilizations enabling one to think and practice the “political” in what is usually seen as “just enjoyment”? In what way does the active recollection of the socialist amateurism develop strategies of (self-) care and new political agency after Yugoslavia?

Since the 2014 election win of BJP, the right-wing Brahmanical (dominant caste supremacist), religious fundamentalist political party, India has witnessed unhindered, State-legitimised violence on Dalit-bahujans (oppressed caste majority communities), among other marginalised groups, paired with the disastrous effects of neo-liberal economic reforms across urban-rural divides. These conditions have resulted into extreme turmoil and unpredictability in the struggle for basic survival and well-being, especially for Dalit-bahujans. Under these conditions, the <i>vidrohi shahiri jalsa</i> (rebellious music gathering), a musical, literary and performance genre developed by Dalit-bahujan youth in Maharashtra, has gained increasing popularity. Throughout history, the caste-specific musical labour of Dalit-bahujans has been constrained by Brahmanical structures to (Hindu) religious, patriarchal and anti-feminist spheres, or appropriated for their benefit. Using the same musical labour and aesthetic with subversive poetry and embodied performance styles that invoke anti-caste, anti-religious and feminist positionality, the vidrohi shahiri jalsareclaims sonic and cultural politics in the absence of coping mechanisms in this moment of religious fanaticism and economic crisis. The efficacy of vidrohi shahiri jalsasassert new mechanisms of building sonic polities given the complex Dalit-bahujan soundscape in Maharashtra. Drawing on case studies of performers and listeners, I examine how caste-specific hereditary labour, especially that embedded in sound, can enable new mobilisations. I investigate the mechanisms of these sonic cues in  the creation of affect and agency and finally explore if/how similar sonic cues can be employed across different regions of India and South-Asia given the ubiquity of caste and hereditary labour.

Life in the Colombian city of Buenaventura is marked by racist exclusion, systemic neglect, and unprosecuted violence, but also by ubiquitous and odds-defying joy, tied to ludic practices using loud sound systems. If politics is unthinkable without a future toward which political action is directed, then the foreclosure of possible futures in Buenaventura exemplifies the end of politics, making of Buenaventura’s musical joy simple escapism. Or perhaps it reveals a new politics of the present tense, which relinquishes systemic change for fleeting but joyous solidarity, making it, like Roberto Esposito’s notion of the “impolitical,” less apolitical than politically agnostic. In Buenaventura, these same “escapist” sounded practices were fundamental to the surprisingly widespread, disciplined, and successful citywide strike of 2017, moving musical joy firmly into the political sphere. Nonetheless, the return of familiar necro-political exclusions, with the 2018 assassinations of grassroots leaders, has again shunted these sounded practices beyond politics, even as their affective ferocity seems to stand in political reserve. This paper compares performative listening practices at three moments in Buenaventura’s recent history: neighborhood musical gatherings circa bloody 2012, the use of sound systems in police-occupied neighborhoods and road blockages in the 2017 strike, and the musicalized funeral of assassinated leader Temístocles Machado in February 2018, to compare the political ramifications of sounded practices in Buenaventura at these three moments. In doing so, this paper aims to describe diachronically how the affective politics of music work across the waxing and waning of the horizons of the political.